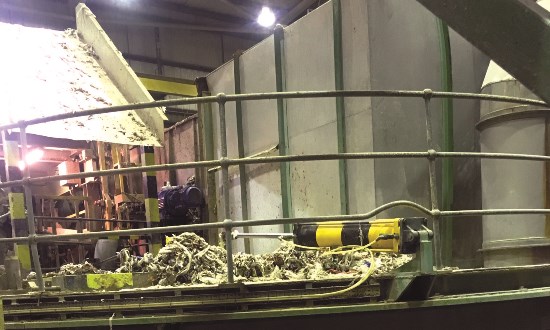 Recycling disposable paper coffee cups remains a tough challenge but DS Smith believes it has a viable solution. Waqas Qureshi visited its Kemsley site to get the lowdown on how the company is working with the supply chain.

March 2018 – following almost two years of publicity and awareness of the UK’s near non-existent coffee cups recycling rates, DS Smith announced its Kemsley site had mastered the technique to successfully separate the plastic lining from paper in coffee cups.Following months of in-depth research, the packaging and paper giant said the site could recycle up to the 2.5bn cups discarded by British coffee consumers annually – a majority of the UK’s coffee cup waste.

So the solution to coffee cups recycling can be found at this site south east of London; yet there are no coffee cups currently being recycled here.This is because collectors have not delivered coffee cup waste – they do not have a viable economic model that pays their wages. The heart of the issue is collections and the value/income collectors can receive to make it economical for them to deliver coffee cup waste to the plant.

DS Smith has already written to the government to call for measures to support better cup collection and provided details of its coffee cup recycling capacity to the Paper Cup Recycling and Recovery Group (PCRRG).

Packaging News took a tour of the facility in Kent to find out more from two veterans of the recycling industry.

Peter Clayson, general manager for DS Smith Recycling, says the company has been working “around the clock” to solve the throw-away coffee cup problem.“There are two challenges to recycling a high volume of coffee cups. Firstly, there is the plastic lining that must be removed from the cups, then we need to ensure that the cups have not been too badly soiled by food waste.”The company has been looking at different cups and different designs starting off in the laboratory, which showed there was a spread of behaviours of the cups in these processes.

Separation of the plastic lining is done in the wet phase – in warm water – by just using frictional sheer forces to separate the paper fibres from the plastic. The cups are moved up and down, left and right in a huge warm water pulper tank, vigorously.

Guy Lacey, technical operations manager at DS Smith, Kemsley, says the challenge from coffee cups is to get the fibres released from the laminate. The biggest issue is when the coating is on both sides – he says it is then not possible for the plant to separate the material as the fibres are actually locked.

“We did some trials and with cold cups. The cups are coated on both sides inside and outside, and it just plugged up and disrupted our process. This is why paper mills have historically refused this material – because of the danger of the material to their machines. It can literally stop the process.”Because of this technical difficulty, DS Smith announced it was only able to process single coated layer coffee cups.

The coffee cup recycling load for this impressive, enormous plant is just 3% of its output. “We have adapted our process so we can tackle them to a certain level – it’s only 3% of our workload, but covers 2.5bn cups. Other mills have not adapted their process and equipment. Coated laminated materials such as this are a big challenge for continuous, big, high speed pulping operations we run. We have adapted the process so that bales of our feedstock go into a huge pulper – maybe 130 tonnes of liquid,” says Lacey.

Because of the sheer forces, with the water, temperature and the agitation, the fibres come away from the plastic and the plastic is extracted. The plastic is taken out and then there is a polishing stage where any remaining paper fibres are removed off the plastic. The plastic is then sent for disposal.Both recycling experts say that viable collection and placing an economic value on coffee cup waste is the issue.

Costa Coffee recently took the lead in this regard, encouraging waste collection firms to collect coffee cups by paying them a supplement of £70 per tonne of coffee cup waste. The idea is to make it commercially and financially attractive for waste collectors to put in place infrastructure to handle the cups – from installing collection points in offices and elsewhere, to sorting them and taking them to recycling plants.

If the collector knows they can bank on £70 per ton, they can also start to invest in vans, bags to collect, sorting equipment, baling and deliveries.Five waste collection firms have been involved in developing the new scheme: Veolia, Biffa, Suez, Grundon and First Mile. Grundon’s sales and marketing director Bradley Smith says Costa was helping to create the right conditions for paper cups to become a valuable recycled material.

“This provides increased stability and confidence in the market, which will help waste management companies like Grundon to extend paper cup recycling services to more customers,” says Smith.

DS Smith wholeheartedly welcomes Costa’s step to specifically pay for its recycling – setting an informal benchmark for the industry.

“Brands such as Costa have a CSR target – they want to be seen to be facilitating the recycling of the equivalent tonnage of cups they put on to the market,” says Clayson. “The Costa contribution is effectively like a voluntary PRN system specifically for coffee cups.”

At the moment, brands have an obligation to pay for paper recycling under the packaging waste scheme – £15 per tonne PRN – and that can be type of packaging waste.Since the regulations were set up, the sector has focused on the easier materials to recycle such as those found at the back of supermarkets. Clayson refers to the voluntary charge from Costa as the basis for a possible ‘on-the-go PRN’ from government when packaging waste regulation changes are finalised.

“This ‘on-the-go PRN’ will trade at a higher value, to drive the infrastructure, to recycle the laminated type products, whereas the pure paper fibre PRN would be a separate one.”

Although the Kemsley plant is currently not recycling any coffee cups, Lacey explains that DS Smith has gone about this issue in the right way.

“We have got the reprocessing capacity here now. But now you need to have the economics to make it worthwhile for the collectors to collect the cups. That’s started with the Costa initiative – they are putting money into the system to fund it.

“It’s almost like saying ‘build it and they will come’. Basically, we have the capacity, and we are having conversations with collectors now,” he says.

The next step appears to be a push from government to implement changes to coffee cup waste collections.