Nearly a fifth of recycling in Carmarthenshire is contaminated 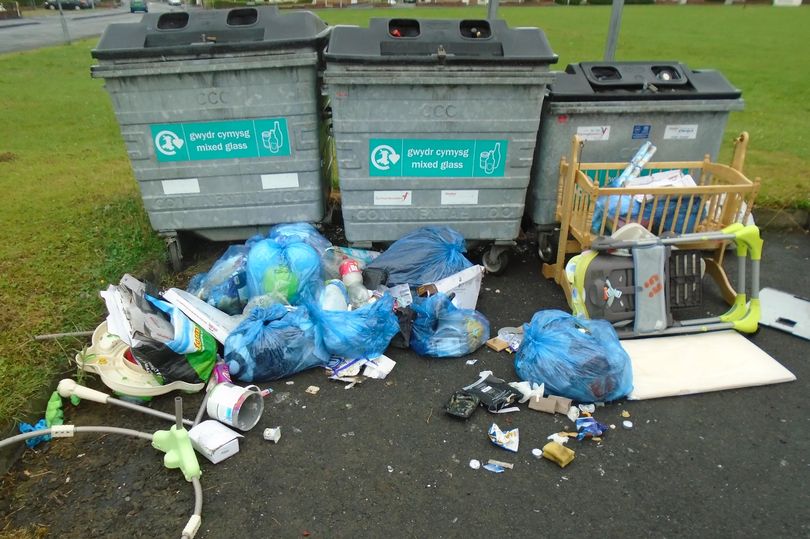 More and more recycled waste in Carmarthenshire is being contaminated by nappies, food scraps and clothes.

Residents can put out as many blue bags as they like for collection but they must contain certain items and not others.

But testing of these blue bags has revealed that 19%, by weight, is contaminated waste.

A council spokesman said this figure was higher than previous results.

“We will be undertaking a campaign to re-emphasise the scheme and what blue bags should be used for,” she said.

The blue bags are designed for paper and cardboard, plastic items including bottles, yoghurt pots and plastic film, and food and drink cans, jar lids, aerosols and foil.

But food, scrap metal, sanitary products, glass and electrical items, among others, must be left out.

Asked what the main offending items were in the blue bags, the council spokeswoman said: “Food waste and nappies, although various other materials are placed in the bags such as clothes and garden waste.”

An investigation two years ago found that one in every seven tonnes of recycling in some Welsh councils was rejected, ending up instead in incinerators or landfill.

The high rates were for authorities where residents put different types of recycling in one bag, ready for it to be segregated after collection, like in Carmarthenshire. The system is known as co-mingling.

In places like Swansea, where residents sort their recycled waste and then put it in different bags at the kerbside, contamination rates are lower.

A Swansea council spokesman said: “While we don’t have specific figures, our contamination rates are relatively low.

“The important issue we all need to look at is highlighted in data provided by the Welsh Government, which tells us that around half of what is collected by councils in black bag waste is recyclable — and approximately 25% of this is food waste.

“We want residents to make use of all the different kerbside recycling services and ensure as little as possible is being sent to landfill.”

Residents in Swansea and Carmarthenshire have nevertheless contributed to ever-rising recycling and composting rates, driven in the main by Welsh Government targets.

Both councils now recycle just under 64% of their household waste.

The BBC Week In Week Out investigation in 2016 said Carmarthenshire’s contamination rate stood at 14%, below Rhondda Cynon Taf’s 21% but significantly above Denbighshire’s six per cent.

The programme was followed by a crackdown on waste contamination in Rhondda Cynon Taf.

Some people have called for greater consistency in recycling methods in Wales, but councils can use whatever system works best for them.

Speaking on the Week In Week Our programme, Rachel Jowitt, of the Welsh Local Government Association, said: “There are pros and cons with both systems. All the studies prove that co-mingling collects more recycling because of greater public buy-in, whereas kerbside sort produces a better quality product with less rejection.”

Waste group Wrap has said the Swansea method of getting residents to sort out their waste worked best.

Wrap chief executive Liz Goodwin said: “Our evidence shows that in the vast majority of cases, sorting materials for recycling at the kerbside is the best option.

“It provides the highest quality and means materials can be used in the best end uses from an environmental and economic perspective.”

CARMARTHENSHIRE Council officers will be showing people in Llanelli how to use litter and recycling bins correctly on Monday. (July 16)

They will also be handing out portable ash trays and gum wraps during the litter awareness-raising day outside Boots in Llanelli, from 10am to 2pm.

The recycling officers will also give advice on how to report dog fouling and litter offences.

And there will be the chance to sign up and to community litter picks.

Councillor Hazel Evans, executive board member for environment, said: “An action day is a great way for us to engage with the community, and an opportunity for us to communicate crucial information and our methods to the public.

“Our residents will also get a chance to voice their concerns and suggestions.”